TwinMotion into Unreal editor for Aximetry not working

Back to Posts
While I have been able to successfully install the Twin Motion plugins in the regular unreal engine which I have downloaded from the Games launcher , I am unable to install the Twin Motion plug in in the aximetry edition of Inreal editor and hence I am not able to import any content via datasmith . I even saved the file in the unreal engine where in the plugin was successfully installed and then tried opening the same in the unreal editor for aximetry however it gave me an error saying that the plugins are missing or have been built through a different engine editor, this even though the plug ins do show up in the plugin section and are enabled on the plugins tab in the unreal editor for aximetry , also the version for unreal in which it is working and the unreal editor version for aximetry are both the same , 4.26.1 ! The attached png file is a screen shot of the error showing up.
I would like to open a twin motion file in unreal as it would save a lot of time in terms of setting up content and redoing all that has been done in terms of lighting and material and textures etc by the designer already. 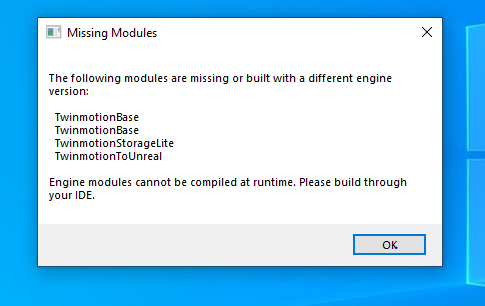 Try removing the plug-in from the Aximmetry UE4 editor plug-in folder and run the plug-in installer from the editor again. Check the output log to confirm that the plug-in actually compiled successfully.

You cannot add the plugins simply by copying into the UE for Aximmetry folders.
Instead please follow this documentation:
https://aximmetry.com/wiki/index.php?title=How_to_Install_Third-Party_Code_Plugins_From_the_Unreal_Engine_Marketplace

Unfortunately the same error, while it works in unreal engine which i have downloaded from the games launcher it doesn't work with the Unreal editor for aximetry. Please help.

Experiences the same problem. I have followed the instructions very carefully.