When calibrating our Panasonic AW-UE100 we run into issues at higher zoom levels (0.8 and above).

While the calibration process worked just fine at 0.2-0.6,
we had to switch to the smaller pattern when the Calibrator asked us to do so,
due to limitations in room size.

The first odd thing (which sort of happened at other zoom levels as well, but was bearable)
is the fact that at he 'Set your focus to the board'-stage of the process,
the sharpness indicator was hard to convince to come up into the yellow range.
Once we we had it within yellow and were allowed to press 'next',
the indicator went fully green, indicating maximum sharpness.
Feels as if two different algo's are used in 'set your focus' and all subsequent stages.

The second odd thing is, that at one point the grey region we are supposed to place the camera in,
became very small, making it literally impossible to place the camera (or the board) in a way
that would allow us to press the highly desired 'next' button.

In fact we had to cancel the calibration process at those higher stages.

The best we could get were *two* arrows on the camera pointing toward and away from the target at the same time. 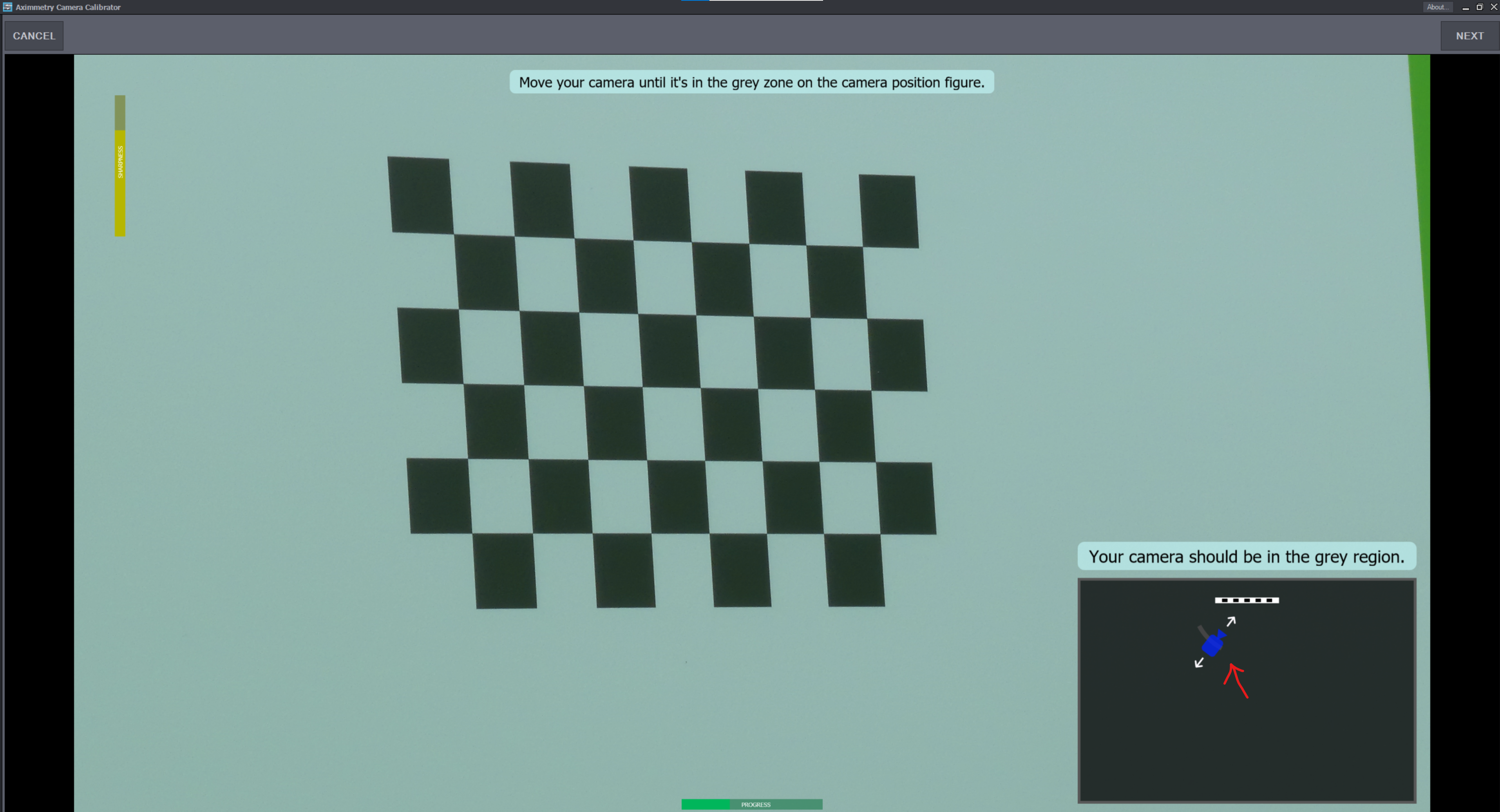 Cheers & all the best.

Thank you very much for the feedback. Note that we actively work on the camera calibrator and feedback like this helps a lot in making it even more user-friendly.

The smaller pattern is meant to prevent cases like yours where there is very little correct position where you can place your camera. Small studio size is one of the reasons why this happens.
There are two possible reasons why you couldn't progress at the end:
You couldn't get far away that the smaller pattern fills the full image.
Or the image wasn't sharp enough. In this case, you could try it with smaller aperture size. Note that the calibrator works fairly well with dark images as long the image is evenly lit.

Can you give us how big of an area you worked on (length) and with what kind of lens? This may help us to further improve the calibrator in the future.

@Eifert: There is something not right with the focus detection algorithm. I tried it with the Sony A1. That’s one of the sharpest images you can get, with a 8K full frame sensor downscaled to 4K in-camera. Using the low contrast color profile we usually use I couldn’t get it to indicate proper sharpness. I switched to a higher contrast rec709 color profile and could still only get only get it into yellow. Maybe you’re using a broadcast camera with artificial sharpening to test the algorithm internally? More cinematic cameras usually don’t have any artificial sharpening applied in-camera.

Thanks for coming back.

Our maximum distance from the lens to the calibration board is 6 meters.

In this case we're using the Panasonic AW-UE100 PTZ with the built-in lens:
https://business.panasonic.de/professional-kamera/ptz-kamera/aw-ue100

Cheers & all the best.

We tested it with several broadcast cameras and PTZ cameras, and without artificial sharpening.
We will try to do tests with digital cameras in the future and see if we have similar issues.

Panasonic AW-UE100 PTZ camera has a 24x optical zoom. It seems a 6 meters distance is just not enough for such a big zoom.
We will consider this in the future developments of the calibrator.

@Eiferr: Many broadcast and especially PTZ cameras will always have some sharpening turned on, even if you turn it way down. The Sony A1 is really the gold standard for sharpness, so if the algorithm doesn’t think it’s sharp when perfectly focused I’m certain that the algorithm needs to be tweaked.